8 Days The Great South of Morocco Tours from Marrakech

When you book with an account, you will be able to track your payment status, track the confirmation and you can also rate the tour after you finished the tour.
Sign Up
844

Why Book With Us?

Do not hesitage to give us a call. We are an expert team and we are happy to talk to you.

8 days desert tour to explore the deep South and desert tour from Marrakech to Merzouga desert and draa valley, this tour will allow you to discover the Deep South east of Morocco and its wonderful Kasbahs and enjoy the most attractive areas in Morocco desert. As well as the visit of Kasbah ait ben haddou and cinema studios in Ouarzazate, visit of dades and toudra gorges, sleep in desert camp under berber tent.

Pick up from your accommodation in Marrakech at 08:00 AM.

8 Days The Great South of Morocco Tours from Marrakech Our tour starts in Marrakech visiting the most important places. We will visit the Jemaa el’ Fna square and the surrounding area.
After breakfast, guided tour of the monuments of Marrakech:
– Bahia Palace: The Bahia Palace is an Arab palace built in the late nineteenth century by the Moroccan architect El Mekki on behalf of the grand vizier Ahmed ben Moussa said Ba Hmad. 7 years were needed for its construction. It has a single level with 150 richly decorated rooms, beautiful patios, and gardens covering several hectares.
– Saadian Tombs: Reliving the golden age of Marrakech It is said that one does not take one’s riches in one’s tomb. Yet, the sixteenth-century Saadian Sultan Ahmed El-Mansour Eddahbi has made the adage lie. Nicknamed “the Victorious”, because of his military successes against Portugal and Sudan, and “Le Doré” for the wealth he derived from the sugar trade, he had the ceiling of the Hall of the Twelve Columns covered with gold. to the sumptuous decor of stucco and marble, so that his future tomb is worthy of his glory. El-Mansour died in the midst of this splendor in 1603. The Alawite Sultan Moulay Ismaïl decided to wall the tombs in order to remove from the spirits the memory of his predecessors. Accessed by a small passage from the mosque of the Kasbah, they fell into oblivion before being rediscovered in 1917.
– Minaret of LA KOUTOUBIA: emblem of Marrakech, served as architectural model at the Giralda of Seville and Hassan Tower of Rabat. A monumental illustration of the Moorish decor, it is distinguished by its mathematical proportions, its festooned arches, and its serrated crenellations. Originally, the minaret was covered with the typical pink plaster of Marrakech. When it was restored in 1990, the specialists decided to keep its authentic appearance and its visible stones. The mosque of Koutoubia is forbidden to non-Muslims (decision taken by General Lyautey), but it is possible to visit its gardens, an ideal place to listen closely to the call of the muezzin.
The Grand Mosque keeps the upper hand on all the activities in the imperial cities: it is the place of worship, the university, the court, the inviolable asylum, the space of conviviality where must fulfill without obstacle the duties towards God and towards men. Social and urban symbol of a power to impress the spirits, the minaret, which transcends the whole city, summarizes the urban ethics. The muezzin’s call to prayer five times a day, which tells the story of the day, is a reminder of the unity of the Muslim community.
– Place Jemaa el Fna: Open Air Theater where trainers of monkeys and snakes, tearing teeth, reading of good adventures surpass themselves in virtuosity to whom you tear the most dirhams for the photo. At dusk, the storytellers keep the public in suspense with the story of ancient Arab legends, told with strong gestures. Astrologers, healers and belly dancers settle on the outskirts of the square, then invaded by a hundred food stalls from which odorous smoke escapes. The whole offers an unforgettable spectacle that earned the place Jemaa el-Fna to be listed in 2001 to the Oral World Heritage of Humanity by UNESCO.
In the place Jemaa el Fna, you can enjoy a Henna tattoo session for women or a session with the fortune-tellers
– Marrakech Souks:
A real labyrinth where the crowd snatches you then brings you into the game of rays of light.
In a maze of shady streets, we cross the copper souk where coppersmiths hammer the metal ancestral way. In the souk of the dyers they dry large skeins of wool with rich colors, stretched from one wall to another on poles. At the souk aux tapis, we sell at auction to the highest bidder.
And the potter’s souk presents tajine dishes, glazed pottery and beautiful ceramics. We also cross the souk of jewelers, leatherworkers and cabinetmakers. In the end the spice souk, there, the scents of saffron, cumin, cinnamon, ginger, cloves, orange blossoms daze the senses
Further on the shelves of apothecaries line up amber, musk, henna pots, jasmine or rose extract vials. Night at the hotel.

Today we departure to the High Atlas mountains via the Tizi n Tichka pass (2,260 m altitude), we pass through Berber villages to reach the fortified village of Ait Ben Haddou, where you will have free time to visit this place. You will have lunch in the village and then we continue toward Ouarzazate where we will enjoy dinner and stay overnight at local hotel.

After breakfast we will visit the city of Ouarzazate. It is considered as door of the desert and we will visit here many interesting places as the Kasbah of Taourirt, and the main palace of the Glaoui, the great Pacha of the South of Morocco. Then we continue toward the valley of the Roses , passing through Skoura, Boumalne Dades, until we reach the Dades gorges where we will have the accommodation and dinner.

Today we departure by road of Kasbahs. After several stops, we arrive at the Todra gorge. The Todra River has formed a gorge with vertical walls of enormous proportions and of great beauty, is the paradise for climbers and a unique place. Then we continue toward Erfoud and Rissani ,until we reach the impressive sand dunes of Merzouga. You will have free time to climb the dunes and enjoy the sunset. You will spend a night in local desert hotel in Merzouga.

Today you will enjoy Erg Chebbi Tour. We will stop at the oasis and where nomadic know share with us some secrets of her life and customs. Then we stop at Khamlia village (people are originally from Mali), there we will enjoy their music of Gwana. Then we get back to hotel to prepare for camel trek of 1 hour and half which will take us to the Great Dune. We sleep in a tents in the heart of the desert.

We wake up you to watch the sunrise in the desert. Then we return to the desert hotel by riding camels and after breakfast and taking a shower we drive toward Rissani for a short visit of local souk. Then we drive to Alnif and we reach the town of Zagora.

After breakfast we departure to Ouarzazate through the Draa Valley with its palm trees. We visit Berber villages and we cross the Anti Atlas (1660 m altitude) then we continue up to the Berber people Tadart where we will have time for lunch, and in the afternoon we depart to Marrakech. We stay here overnight in a local hotel/riad.

“Who is used to traveling, knows that there is always a time when you have to leave.” Paulo Coelho, The Alchemist.
After breakfast and following the flight schedule,
Transfer to the airport, boarding assistance and end of our services. 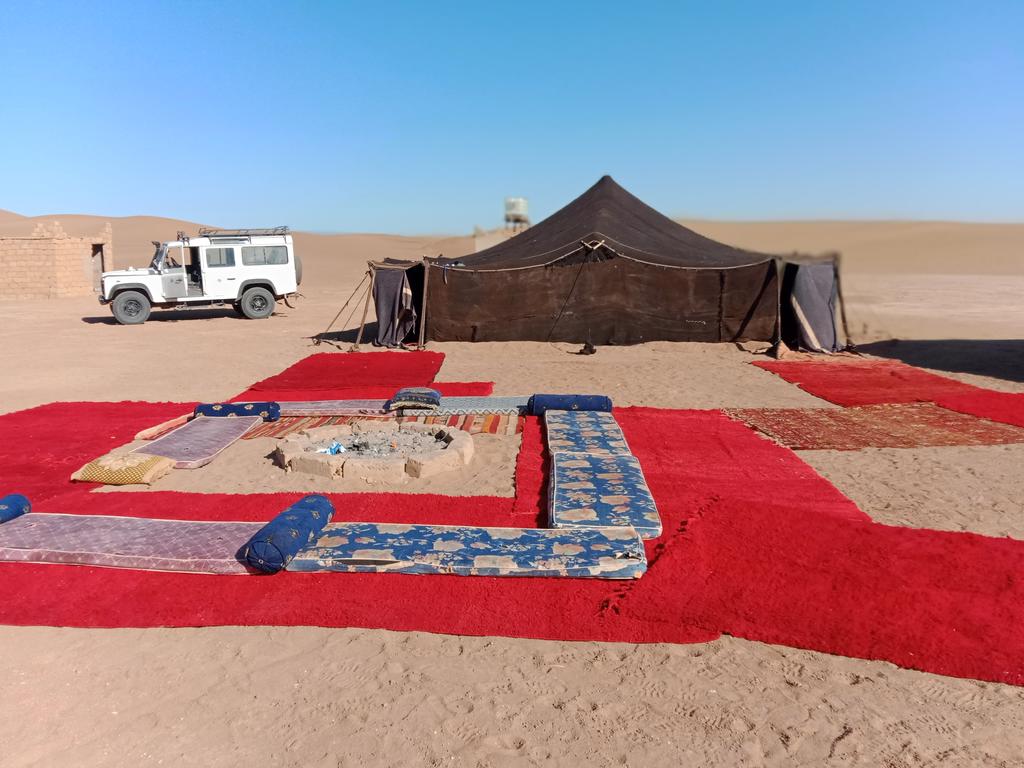